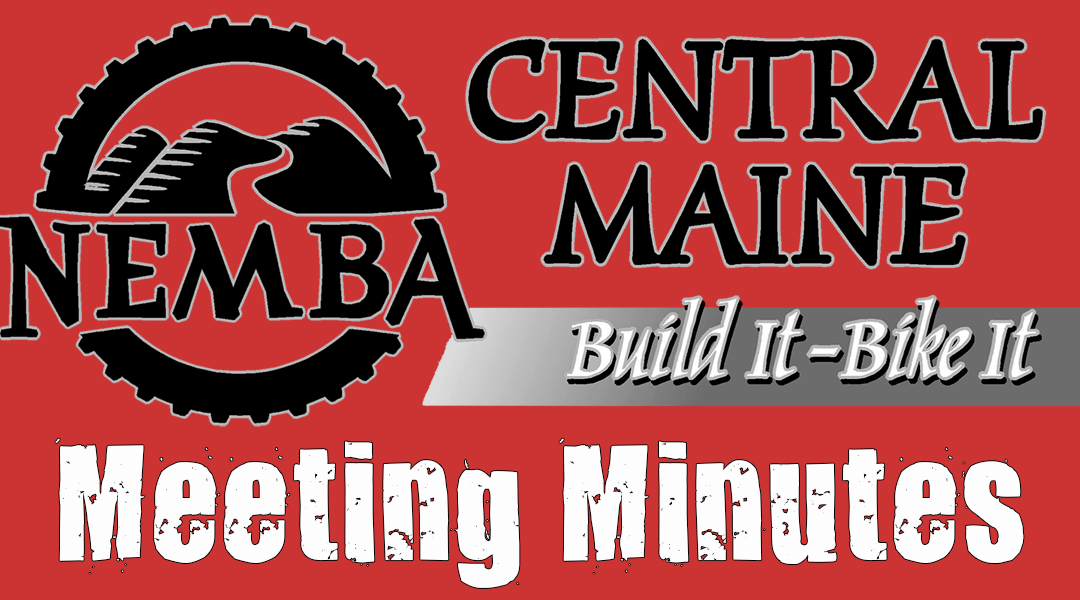 CeMENEMBA Board Meeting
March 29, 2021
Via ZOOM

The Central Maine Chapter of the New England Mountain Biking Association held a regular chapter
board meeting on March 29 th at 6pm via ZOOM. Members and officers present included Chris Riley,
Pres., Disa F., VP; Matt Swann VP; Frank Jalbert, VP; Leslie Wilson, treasurer; Garry Hinkley, Sec.; Ian,
Ted, Tracy, Ryan, and Renee. Guests included Brian Alexander, trail master; and Travis Counsell, NEMBA
executive director.
Treasurer’s Report. Leslie reported a total balance of $125,274.56. Of that, $110,000 are restricted
funds, either reserved or dedicated, and the balance of $15,274. 56 are unrestricted. There was
approximately $2600 of income and $1100 of expenses since the last report. Income included chapter
rebates and donations. Expenses were mostly for events, signs, materials and gas. Chris noted two
donations: Lost Valley returned $1400 from the recent “Fatduro” event held there; and Gorham Ski and
Bike donated $450. The intent of the LV donation is to upgrade the Brocktown trails to make grooming
easier.
Leslie has been working with NEMBA on the End of Year financial reports. Chris thanked her for her
work in keeping our chapter’s books in great shape.
Winter grooming. In spite of the paucity of snow that led to a late start, winter grooming and winter
riding was deemed a success. Winter trails were maintained and groomed at York Hill Farms in New
Sharon, Allen-Whitney Forest in Manchester, Lost Valley ski area (Brocktown) in Auburn, and the “B-trail
in Rome. Thanks to the groomers, Brian Alexander, Josh Staples, Chris Trider, and Mack McAfee.
Moved and seconded to give $100 to John and Penny Downing in recognition of the Downings allowing
parking at YHF again this winter. Ted/Ian. Unanimous.
Recognized Chris Trider’s extreme dedication to the Brocktown trails.
Spring Cleanup. Will organize a series of general trail cleanups, brush removal, leaf blowing etc.
Members are encouraged to walk the trails primarily to fix drainage problems, and note other needs.
Leaf blowers are available. Any work should be reported so that we are efficient with our assignments.
Trail Crew and summer projects. It’s looking as if it will be a busy summer. Chris noted that most of our
trail crew is returning, with a possible couple of new members. Will Libby will again manage the trail
crew. Chris noted that the starting pay is $12.50 for new members and $13.50 for experienced
members. New members will be eligible for the higher rate after 100 hours of satisfactory work.
In addition to ongoing maintenance, Chris noted that there are major projects planned for Quarry Road,
Titcomb, and the A trail. Minor projects planned for Kerns Hill, Bond Brook, and Mt. A. At QR,
CeMENEMBA is the project manager for an RTP grant for a significant trail buildout. We also have a
Signature grant to finish. The Kerns Hill Connector in Manchester would result in about two miles of
new trail with the Junkyard as the starting point. This would be an add on to the Res, and is phase one
of what may be a much larger project on Manchester town properties along the Pipeline road. Kerns

Hill likely will be the first project of the summer. The trail will be the same general design as the Res
trails.
Another possible project would be to connect Carrie On and Signature trails at Mt. A.
There will be a new trail at Bond Brook.
Range Pond – Gorp trail fix.
Chris is finalizing the budgets for all the projects. As usual, we probably have more potential work than
available time and resources.
Chris is exploring the possibility of applying for a Northern Forests grant for possible projects in Franklin
County.
Treadfest. Treadfest is June 19 th at Bond Brook. Volunteers needed. This year is a one day event with a
simplified format. We need 75 riders at a minimum to make it worthwhile. Bangor Savings Bank has
donated $1,000. We need to raise another $2,000 to cover expenses
Tuesday Night Trailwork (TNTs). Agreed to resume TNT’s on a biweekly basis. Work will be spread
among the systems, probably supporting the trail crew schedule. Chris noted that Ted had gone
through the tool trailer and organized and prepared our tools.
WNRs. Agreed to resume Wednesday Night Group Rides with appropriate COVID-19 safety protocols.
Waivers required. Will probably resume the “mild, moderate, spicy” concept with a no-drop policy for
the milder rides.
Chris will look into getting the website updated. The officers need to be updated.
Next meeting will be Sunday, May 2 nd at 7:30PM via ZOOM.
Respectfully submitted,
Garry Hinkley, Sec.